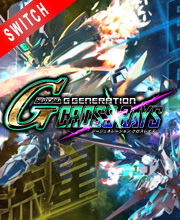 It's a digital key that allows you to download SD Gundam G Generation Cross Rays directly to Nintendo Switch directly from Nintendo eShop.

How can I find the best prices for SD Gundam G Generation Cross Rays on Nintendo Switch ?

The developer encourages you to gather your favourite characters from various Mobile Suit Gundam series to train, develop, and form groups. Create a team using the unique game system and live the stories of various Gundam series.