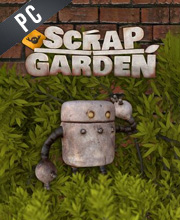 What is Scrap Garden CD key?

It's a digital key that allows you to download Scrap Garden directly to PC from the official Platforms.

How can I find the best prices for Scrap Garden CD keys?

Allkeyshop.com compares the cheapest prices of Scrap Garden on the digital downloads market to find the best sales and discount codes on trusted stores.

Scrap Garden is a puzzle platformer game developed by indie devs Egidijus Bachur and Alexey Davydov, about the charming adventures of Canny a robot who woke up alone in a post-apocalyptic world where all of the other robots had seized up and stopped working. Find out what happened to the city? why did all the robots stop moving? And is there anyone else who survived except for him? Canny has to be strong to answer all of these questions and fix everything.

If you’re a fan of 3D platformers like Spyro the Dragon or Ratchet and Clank, I’d recommend giving Scrap Garden a try. Discovering the mystery of what happened to all the frozen robots while knocking them over so you can remember where you’ve been maybe a messed up kind of bread crumb trail, but it’s fun nonetheless.

Zoom 1m 3m 1y All
Track product
STEAM CD KEY : Use the Steam Key Code on Steam Platform to download and play Scrap Garden. You must login to your Steam Account or create one for free. Download the (Steam Client HERE). Then once you login, click Add a Game (located in the bottom Left corner) -> Activate a Product on Steam. There type in your CD Key and the game will be activated and added to your Steam account game library.
Standard Edition
Compare Choose & Buy Download (743)