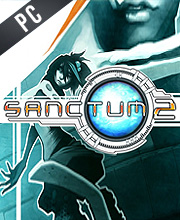 What is Sanctum 2 CD key?

It's a digital key that allows you to download Sanctum 2 directly to PC from the official Platforms.

How can I find the best prices for Sanctum 2 CD keys?

Allkeyshop.com compares the cheapest prices of Sanctum 2 on the digital downloads market to find the best sales and discount codes on trusted stores.

Sanctum 2 is an action strategy game developed and published by Coffee Stain Studios. It is the long-awaited sequel to the world’s first tower defense-FPS game, Sanctum.

Sanctum 2 has four unique character classes with unique strengths, weaknesses, and weapons you can choose from, and your mission is to protect the oxygen-producing Cores from aliens. In order to do these, you have you construct towers and walls during the game’s building phase in order to shield them from enemy attacks. As soon as the attack phase starts, get yourself in FPS mode and shoot your way and blast enemies you encounter.

While the single-player mode can be fun in itself, playing with friends in co-op mode also brings the fun to another level. With Sanctum 2’s co-op mode, you get to discover the secrets of LOEK III as well as learn the story behind the aliens’ intent on destroyung the Cores.

Other key features of the game include customization options, an in-game visual novel to be unlocked, and a progression system which allows you to increase your rank and unlock new weapons, towers, and perks.

Experience the adrenaline-filled action and defense in Sanctum 2! You won’t regret it.

EU STEAM CD KEY: Requires an EUROPEAN IP address or you must activate it with a VPN (Virtual Private Network) in order to play Sanctum 2. Might have languages restrictions or language packs. Read the description on the store game page to know if the EU IP is only needed for activation or for playing also (maybe on EU Servers). Most of the stores offer you their help, or show you how to do this with a tutorial to follow.
STEAM GIFT : A Steam gift is a one-time transfer you receive. You activate and install Sanctum 2 to play on Steam, it is a non-refundable game that stays in your Steam games collection. Please read the store description about any language or region restrictions.
STEAM CD KEY : Use the Steam Key Code on Steam Platform to download and play Sanctum 2. You must login to your Steam Account or create one for free. Download the (Steam Client HERE). Then once you login, click Add a Game (located in the bottom Left corner) -> Activate a Product on Steam. There type in your CD Key and the game will be activated and added to your Steam account game library.
Complete Pack
Standard Edition