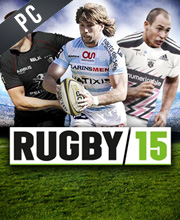 It's a digital key that allows you to download Rugby 15 directly to PC from the official Platforms.

How can I find the best prices for Rugby 15 CD keys?

Allkeyshop.com compares the cheapest prices of Rugby 15 on the digital downloads market to find the best sales and discount codes on trusted stores.

Rugby 15 is a rugby simulation game developed by HB Studios and published by Big Ben Interactive.

The game allows players to select the weather for their matches as well as the time of the day. Players can also decide on the wind speed. Its AI dynamically adapts to the player’s play style and in-game situations; the same can be done using controls that lets players change their defense or attack.

Rugby 15 includes the best teams from the biggest leagues, such as the Aviva Premiership Rugby and the PRO 12. In Friendly Match mode, players get to take on their friends. In Season Mode, players get to set off in the race to grab their own titles for the Brennus shield, or the AVIVA PREMIERSHIP RUGBY. Custom Cup allows players to create their own competitions. Other modes are European Trophy, 6 Countries, Southern 15, and 4 Nations.

The game also features more realistic movements and animations, thanks to the power of Motion Capture with real-life rugby players. Player characteristics are also as close as it can be with their real-life counterparts, thanks to databases provided by OPTA.

Zoom 1m 3m 1y All
Track product
PUBLISHER WEBSITE CD KEY: Use the CD Key Code to download directly on the Official Website or from the store to play Rugby 15. Follow the instructions given by the store. Verify languages available and possible region restrictions before buying.
EU STEAM CD KEY: Requires an EUROPEAN IP address or you must activate it with a VPN (Virtual Private Network) in order to play Rugby 15. Might have languages restrictions or language packs. Read the description on the store game page to know if the EU IP is only needed for activation or for playing also (maybe on EU Servers). Most of the stores offer you their help, or show you how to do this with a tutorial to follow.
STEAM CD KEY : Use the Steam Key Code on Steam Platform to download and play Rugby 15. You must login to your Steam Account or create one for free. Download the (Steam Client HERE). Then once you login, click Add a Game (located in the bottom Left corner) -> Activate a Product on Steam. There type in your CD Key and the game will be activated and added to your Steam account game library.
Standard Edition
Compare Choose & Buy Download (743)

Rugby 15 is a sports simulation in which the player can play rugby. The license has the official license of French and English championships such as D2 and Pro12. The player can therefore choose from many existing teams to play. it’s a good game.

Rugby 15 very very nice game …
i really like this game and i want play this game online …
thanks .

It’s not really popular game like Fifa 15 and 16 but it’s very good and cheap on Allkeyshop!