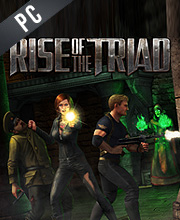 What is Rise of the Triad CD key?

It's a digital key that allows you to download Rise of the Triad directly to PC from the official Platforms.

How can I find the best prices for Rise of the Triad CD keys?

Allkeyshop.com compares the cheapest prices of Rise of the Triad on the digital downloads market to find the best sales and discount codes on trusted stores.

Rise of the Triad is a first-person action shooter game developed by Interceptior Entertainment and published by Apogee Software. It is the modern-day reboot to the cult classic with better, bigger, and more ludicrous elements than before. The game has both a full single-player campaign as well as a fully featured multiplayer mode.

You will play as a member of the H.U.N.T. (High-Risk United Nations Taskforce). This team consists of five unique characters and each of them have their own play style. In single-player campaign, you get to blast through more than 20 levels complete with a full arsenal of over-the-top weapons including the Flamewall, Firebomb, Split Missile, and the Excalibat. The maniacal game modes are also making a comeback including the Elasto Mode, God Mode, Shrooms Mode, Mercury Mode, and the fan favorite Dog Mode.

Wanna play with friends? Get into the online multiplayer mode and experience the fun and excitement that classic ROTT brings. Show off your creativity and build your own levels and mods and share them through the Ludicrous Development Kit and Steam Workshop.

All these and more are waiting for you in Rise of the Triad! It’s nostalgia paired with modern-day awesomeness that will surely bring you tons of hours of action-packed fun.

Pack: Includes four copies of Rise of the Triad

PUBLISHER WEBSITE CD KEY: Use the CD Key Code to download directly on the Official Website or from the store to play Rise of the Triad. Follow the instructions given by the store. Verify languages available and possible region restrictions before buying.
STEAM CD KEY : Use the Steam Key Code on Steam Platform to download and play Rise of the Triad. You must login to your Steam Account or create one for free. Download the (Steam Client HERE). Then once you login, click Add a Game (located in the bottom Left corner) -> Activate a Product on Steam. There type in your CD Key and the game will be activated and added to your Steam account game library.
STEAM KEY ROW : It means for Rest Of the World countries which are not concerned by the region restrictions. This product can't be purchased and activated in Several countries. Please read the store description to know the full list of countries which are concerned. Use the key to Download and play Rise of the Triad on Steam.
STEAM GIFT : A Steam gift is a one-time transfer you receive. You activate and install Rise of the Triad to play on Steam, it is a non-refundable game that stays in your Steam games collection. Please read the store description about any language or region restrictions.
Standard Edition

Be the first one to write a review about Rise of the Triad !