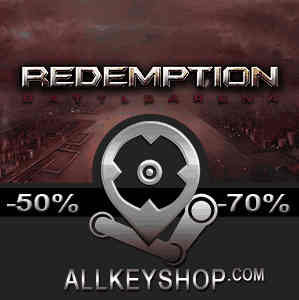 What is Redemption CD key?

It's a digital key that allows you to download Redemption directly to PC from the official Platforms.

How can I find the best prices for Redemption CD keys?

Allkeyshop.com compares the cheapest prices of Redemption on the digital downloads market to find the best sales and discount codes on trusted stores.

Set in a post-apocalyptic world and after the tragic events of World War III. The war has settled and everyone is in agreement of having just one form of government ruling the whole world. This ruling body is called the ‘World Government’ and it tries its best to have peace and order across the globe. The world does remain in peace but only until ‘The Judgement Day’ where mutants are a threat to the very existence of humans.

This action role-playing game (ARPG) will let you go on adventures like clearing 2 major dungeons with 11 stages, going on the challenge mode by surviving hordes and hordes of mutants or by killing a number of bosses under a time limit. Go on all out battles from 1v1, 2v2, 3v3, 4v4, and 5v5 deathmatches.

You are mankind’s only hope from total extinction. Will you be able to deliver?

STEAM GIFT : A Steam gift is a one-time transfer you receive. You activate and install Redemption to play on Steam, it is a non-refundable game that stays in your Steam games collection. Please read the store description about any language or region restrictions.
STEAM CD KEY : Use the Steam Key Code on Steam Platform to download and play Redemption. You must login to your Steam Account or create one for free. Download the (Steam Client HERE). Then once you login, click Add a Game (located in the bottom Left corner) -> Activate a Product on Steam. There type in your CD Key and the game will be activated and added to your Steam account game library.
Early Access