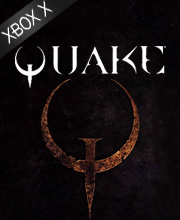 It's a digital key that allows you to download Quake directly to Xbox Series X from Xbox Live.

How can I find the best prices for Quake on Xbox Series X ?

PC Win 10 / Xbox Series Key : This is a Microsoft Xbox Play Anywhere code to play on PC and Xbox Series. You need to have installed Windows 10 Anniversary Edition update on your PC or the latest update on your Xbox Series console. Log into your Xbox Live/Microsoft account to download and play. Read closely the description given by the store to activate your game.
Standard Edition