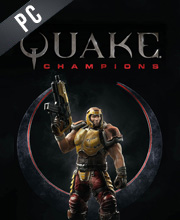 What is Quake Champions CD key?

It's a digital key that allows you to download Quake Champions directly to PC from the official Platforms.

How can I find the best prices for Quake Champions CD keys?

Allkeyshop.com compares the cheapest prices of Quake Champions on the digital downloads market to find the best sales and discount codes on trusted stores.

Quake Champions is a first-person shooter video game that has been developed by id Software and published by Bethesda Softworks. This follows Quake 4 from the Quake series.

A new and definitely most improved Quake is here with Quake Champions. Although everything is mostly new in the game, the fast, skill-based arena-style competition will definitely feel nostalgic for those who have played the previous Quake games.

Quake Champions will have new and exciting multiplayer maps that will give the players total enjoyment. Choose from the many characters each with their unique skills for combat, master each one and be the best in the arena. Combat will be way fast so don’t dare blink an eye or you might die. The game can run at 120Hz with completely unlockable frame rate.

And of course, everybody’s favorite rocket jumps are making a comeback as well as close-ranged melee combat and dynamic weapon pick ups!

Whether an old fan or new to the Quake scene everyone will love the fast paced action that Quake Champions offer.

Zoom 1m 3m 1y All
Track product
PUBLISHER WEBSITE CD KEY: Use the CD Key Code to download directly on the Official Website or from the store to play Quake Champions. Follow the instructions given by the store. Verify languages available and possible region restrictions before buying.
STEAM CD KEY : Use the Steam Key Code on Steam Platform to download and play Quake Champions. You must login to your Steam Account or create one for free. Download the (Steam Client HERE). Then once you login, click Add a Game (located in the bottom Left corner) -> Activate a Product on Steam. There type in your CD Key and the game will be activated and added to your Steam account game library.
Bonus Edition
Champion Edition
Early Access
Standard Edition
Starter Pack
Compare Choose & Buy Download (772)

So this is for full unlock for all characters, not beta key? And you get full refund after release 12/31/2017 if it doesn’t work?

This is a PRE-ORDER, the key will be delivered upon the game’s release date: 2017!
This is the full game, not the beta.

Wow finally that game back and in bigg. Waiting for that so much.

Because the game will be released as free 2 play, it was confirmed by id software. So do not buy what ever they show you here.

Yes the game is Free to Play, but there will be pack for to unlock some or all classes.

I’ve always heard great stuff about Quake.. Bit surprised it hasnt been commented or shared as much! May buy in the future