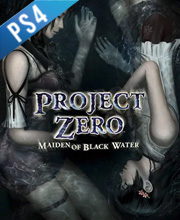 It's a digital key that allows you to download PROJECT ZERO MAIDEN OF BLACK WATER directly to Playstation 4 from PSN (Playstation network).

Project Zero: Maiden of Black Water is a welcome remaster and it’s great to see this game reach the wider audience it deserves. I’d definitely recommend picking this up if you’re a series fan, or are interested in what makes it so unique, but it shows its ages and loses some of what made it such a good fit for the Wii U.