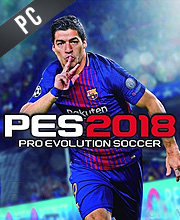 It's a digital key that allows you to download Pro Evolution Soccer 2018 directly to PC from the official Platforms.

How can I find the best prices for Pro Evolution Soccer 2018 CD keys?

Allkeyshop.com compares the cheapest prices of Pro Evolution Soccer 2018 on the digital downloads market to find the best sales and discount codes on trusted stores.

This newest Pro Evolution Soccer game has a lot of brand new features that players will surely enjoy! First is the Gameplay Master Class. Because of this, the gameplay quality was finely tuned making it a more realistic and beautiful game as well. It will now have Strategic Dribbling, Real Touch+, as well as a rework on the Free Kick and Penalty Kick system was made. Enhanced Visual Reality was also added making the game’s visuals more realistic than ever. There is now an Online Co-Op of 2v2 and 3v3.

New Modes & Features will include a Random Selection Match as well as a Master League. A Presentation Overhaul can also be seen with a new UI for all the games news. The PES League Integration will now include the myClub, Random Selection Match and Online Co-Op. Significant PC Improvements can also be seen with more enhancements in graphics and content.

Your favorite soccer game is back and it is better than ever!

Zoom 1m 3m 1y All
Track product
EU STEAM CD KEY: Requires an EUROPEAN IP address or you must activate it with a VPN (Virtual Private Network) in order to play Pro Evolution Soccer 2018. Might have languages restrictions or language packs. Read the description on the store game page to know if the EU IP is only needed for activation or for playing also (maybe on EU Servers). Most of the stores offer you their help, or show you how to do this with a tutorial to follow.
STEAM CD KEY : Use the Steam Key Code on Steam Platform to download and play Pro Evolution Soccer 2018. You must login to your Steam Account or create one for free. Download the (Steam Client HERE). Then once you login, click Add a Game (located in the bottom Left corner) -> Activate a Product on Steam. There type in your CD Key and the game will be activated and added to your Steam account game library.
STEAM KEY ROW : It means for Rest Of the World countries which are not concerned by the region restrictions. This product can't be purchased and activated in Several countries. Please read the store description to know the full list of countries which are concerned. Use the key to Download and play Pro Evolution Soccer 2018 on Steam.
Barcelona Edition
Limited Edition
Premium Edition
Standard Edition
Compare Choose & Buy Download (791)

In the graphics area, this game is better than fifa so a must buy!

Best football game to play with friends. I recommand it.