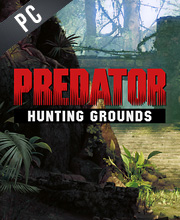 It's a digital key that allows you to download Predator Hunting Grounds directly to PC from the official Platforms.

How can I find the best prices for Predator Hunting Grounds CD keys?

Allkeyshop.com compares the cheapest prices of Predator Hunting Grounds on the digital downloads market to find the best sales and discount codes on trusted stores.

Predator Hunting Grounds is an action shooter video game that is developed by IIIFonic and published by Sony Interactive Entertainment.

Play as the hunter or the hunted in this asymmetrical multiplayer shooter. Choose which side to play as you can be part of an elite 4-person Fireteam or get to play as the Predator itself.

As a part of the elite Fireteam, you are able to use state-of-the-art arsenal ranging from pistols, assault rifles, shotguns, grenades, and heavy weapons. If you choose to be the Predator you get to use the shoulder-mounted Plasma Caster, Wrist Blades, Smart Disc, Combistick and so much more.

There are several conflict zones available, all set in the remote jungles of South America. The game world feels authentic to the lore of the Predator Universe. Players get to enjoy the Predator theme song, the thermal Predator vision, as well as the signature light-bending camouflage.

Whichever side you choose on Predator Hunting Grounds, both are assured to give you an exciting time playing.

Zoom 1m 3m 1y All
Track product
EPIC GAMES KEY : Region Free / Worldwide. Requires Epic Games Launcher App in order to play the game. You need to create a free account here in order to download Predator Hunting Grounds from Epic Plateform . Read the description on the store page about any language or country restrictions.
EU STEAM CD KEY: Requires an EUROPEAN IP address or you must activate it with a VPN (Virtual Private Network) in order to play Predator Hunting Grounds. Might have languages restrictions or language packs. Read the description on the store game page to know if the EU IP is only needed for activation or for playing also (maybe on EU Servers). Most of the stores offer you their help, or show you how to do this with a tutorial to follow.
STEAM GIFT : A Steam gift is a one-time transfer you receive. You activate and install Predator Hunting Grounds to play on Steam, it is a non-refundable game that stays in your Steam games collection. Please read the store description about any language or region restrictions.
STEAM CD KEY : Use the Steam Key Code on Steam Platform to download and play Predator Hunting Grounds. You must login to your Steam Account or create one for free. Download the (Steam Client HERE). Then once you login, click Add a Game (located in the bottom Left corner) -> Activate a Product on Steam. There type in your CD Key and the game will be activated and added to your Steam account game library.
STEAM KEY ROW : It means for Rest Of the World countries which are not concerned by the region restrictions. This product can't be purchased and activated in Several countries. Please read the store description to know the full list of countries which are concerned. Use the key to Download and play Predator Hunting Grounds on Steam.
Bundle
Deluxe Edition
Predator Bundle
Standard Edition
Compare Choose & Buy Download (743)

Hunting Grounds offers only one mode and a choice between a Predator or a human soldier.