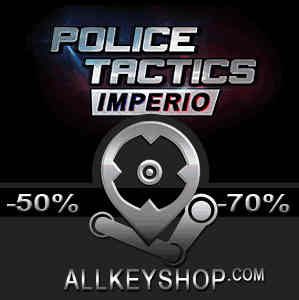 It's a digital key that allows you to download Police Tactics Imperio directly to PC from the official Platforms.

How can I find the best prices for Police Tactics Imperio CD keys?

Allkeyshop.com compares the cheapest prices of Police Tactics Imperio on the digital downloads market to find the best sales and discount codes on trusted stores.

Police Tactics: Imperio s a real time strategy game. Developed by CyberphobX and published by Astragon. Fight crime and make sure that law and order is established.

Years ago the city was run by a notorious criminal organization called the Imperio. They terrorized the people of the city which left them living in fear. The police are powerless against the syndicate, until a tough police named John Croft came. He and his equally fearless team was able to put a stop to most of the Imperio’s illegal deeds.

When John Croft was about to arrest the syndicate’s leader, the whole syndicate suddenly disappeared. Nobody knew what happened, but John Croft was later found dead and the incident was never resolved. With John Croft dead, Imperio’s organization is making a comeback.

In Police Tactics: Imperio, you will take the role of Harvey Croft, the son of the legendary John Croft. As the police chief of the city it is your task to keep the city safe. With your patrolmen make sure that peace and order is again experienced in the city.

Do what it takes to finally crush the criminal syndicate Imperio.

Zoom 1m 3m 1y All
Track product
EU STEAM CD KEY: Requires an EUROPEAN IP address or you must activate it with a VPN (Virtual Private Network) in order to play Police Tactics Imperio. Might have languages restrictions or language packs. Read the description on the store game page to know if the EU IP is only needed for activation or for playing also (maybe on EU Servers). Most of the stores offer you their help, or show you how to do this with a tutorial to follow.
STEAM GIFT : A Steam gift is a one-time transfer you receive. You activate and install Police Tactics Imperio to play on Steam, it is a non-refundable game that stays in your Steam games collection. Please read the store description about any language or region restrictions.
STEAM CD KEY : Use the Steam Key Code on Steam Platform to download and play Police Tactics Imperio. You must login to your Steam Account or create one for free. Download the (Steam Client HERE). Then once you login, click Add a Game (located in the bottom Left corner) -> Activate a Product on Steam. There type in your CD Key and the game will be activated and added to your Steam account game library.
STEAM KEY ROW : It means for Rest Of the World countries which are not concerned by the region restrictions. This product can't be purchased and activated in Several countries. Please read the store description to know the full list of countries which are concerned. Use the key to Download and play Police Tactics Imperio on Steam.
Standard Edition
Compare Choose & Buy Download (743)

g2a has the lowest price at the moment.
i’ll get it there.
this game is awesome.
keep it up allkeyshop 🙂

Best store for Police Tactics is gamesrocket.de. Best for all.

Kinguin and G2Play sellers have really discounted Police Tactics. Not sure how long it will last, or indeed if it will last past September 8.