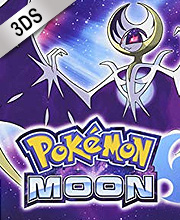 What is Pokemon Moon Game Code?

It's a digital key that allows you to download Pokemon Moon directly to Nintendo 3DS directly from Nintendo eShop.

How can I find the best prices for Pokemon Moon on Nintendo 3DS ?

Allkeyshop.com compares the cheapest prices of Pokemon Moon on the digital downloads market to find the best sales and discount codes on trusted stores.

Pokemon Moon Nintendo is an adventure role-playing game that was published by Nintendo and developed by Game Freak for the Nintendo 3DS. It is half of the Pokemon Sun and Moon duo which are joint first installments in the seventh generation of the Pokémon video game series. Pokemon Moon features a new Alola Region and three new Partner Pokémon; namely, Rowlet, Litten and Popplio. Get ready to discover the mystery behind the new Legendary Pokémon Solgaleo and Lunala. In addition, you will encounter new Pokémon to catch, battle and trade.