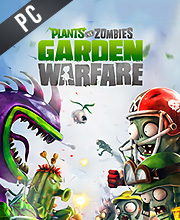 What is Plants vs Zombies Garden Warfare CD key?

It's a digital key that allows you to download Plants vs Zombies Garden Warfare directly to PC from the official Platforms.

How can I find the best prices for Plants vs Zombies Garden Warfare CD keys?

Allkeyshop.com compares the cheapest prices of Plants vs Zombies Garden Warfare on the digital downloads market to find the best sales and discount codes on trusted stores.

Plants vs. Zombies Garden Warfare is a third-person multiplayer shooter and tower defense game developed by PopCap Games and published by Electronic Arts.

It is the third game in the Plants vs. Zombies series and is a multiplayer focused type of game. The game’s main feature is its co-op gameplay as well as its competitive multiplayer modes where players can either play as plants, or the zombies.

Get to play with as many as 24 players divided into teams between the plants and the zombies. The zombies, as well as plants that fans came to love in the earlier installment of the series, are the main characters in this game. With 10 different battlegrounds to choose from, you are sure to have an enormous amount of fun. Each score and victory you make counts and allows you to unlock new characters and more through Sticker Packs, so dominating the game is a definite must!

Want to experience PvZ on an entirely new level? Well, grab the Plants vs. Zombies Garden Warfare Digital Deluxe Edition and you’ll get 150,000 coins to spend on customization options as well as get an exclusive custom accessories pack!

Plants vs. Zombies Garden Warfare is definitely a game of pure fun and multiplayer epicness – you simply cannot miss any of it!

ORIGIN CD KEY : Use the Origin Key Code (Electronic Arts - EA) on Origin Platform to download and play Plants vs Zombies Garden Warfare. You have to login to your Origin Account or create one for free. Download and install the Origin Software HERE) then you can activate the game on it. Once installed, start Origin, click on the Origin Tab and click on Redeem Product Code and just enter the key. The game will appear in your My games list.
ORIGIN KEY ROW : It means for Rest Of the World countries which are not concerned by the region restrictions. This product can't be purchased and activated in Several countries. Please read the store description to know the full list of countries which are concerned. Use the key to Download and play Plants vs Zombies Garden Warfare on Origin.
Deluxe Edition
Origin Bundle
Standard Edition

Plants vs Zombies games are as coloured as fun! Great gameplay and super enjoyable gameplay.

Don’t forget to join our lotteries and all our giveaways for you to get a chance to win free games!

You can find the FAQ regarding our Lottery and Rewards Program below.

I bought this game a while ago and I can say it’s definitely one of the best multiplayer games in the world. I surely recommend it to everyone.