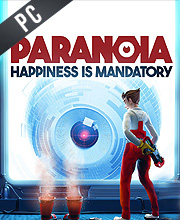 What is Paranoia Happiness is Mandatory CD key?

It's a digital key that allows you to download Paranoia Happiness is Mandatory directly to PC from the official Platforms.

How can I find the best prices for Paranoia Happiness is Mandatory CD keys?

Allkeyshop.com compares the cheapest prices of Paranoia Happiness is Mandatory on the digital downloads market to find the best sales and discount codes on trusted stores.

Paranoia: Happiness is Mandatory is a role-playing video game that is developed by Black Shamrock and Cyanide Studio and published by Bigben Interactive.

Inspired by the CRPG (cult role-playing game), Paranoia: Happiness is Mandatory will let you form and lead a team of four people to protect the Alpha Complex. The Alpha Complex is the last peaceful refuge for humanity and is being controlled by Friend Computer. Every citizen here enjoys a happy and clean environment. However, going against the wishes of the Friend Computer will equal to treason and is punishable by summary execution.

The Computer, Alpha Complex itself is the way of life in this refuge, and there are a lot plotting against it. Your job is to identify and report these people, and if necessary use your handy laser against them. If you do something right, you will be rewarded immediately. But if you do something considered as treason, you will be punished accordingly.

Welcome to a retro-futuristic world that is filled with technology that is both amazing as well as deadly. There will be 9 specializations to choose from with different skills. And just like any CRPG games, the game offers real-time tactical combat with an active pause. All the enemies in this world that you will encounter are original like malfunctioning robots, defective clones, and crazy drink dispensers.