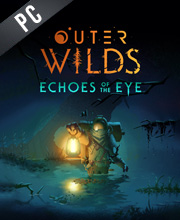 What is Outer Wilds Echoes of the Eye CD key?

It's a digital key that allows you to download Outer Wilds Echoes of the Eye directly to PC from the official Platforms.

How can I find the best prices for Outer Wilds Echoes of the Eye CD keys?

Allkeyshop.com compares the cheapest prices of Outer Wilds Echoes of the Eye on the digital downloads market to find the best sales and discount codes on trusted stores.

Outer Wilds Echoes of the Eye is the first and last DLC expansion for the critically acclaimed indie game Outer Wilds. Outer Wilds Ventures has a new mission for you, investigate a strange satellite photo that could not be explained by conventional science. A new museum exhibit will open, this will mark your last journey in this solar system. Choose wisely, do you choose to pull at the thread and unravel the solar system’s last and deepest secret? or are you finally going to finally let sleeping dogs lie and be content that some knowledge is better lost and left in the dark?

Mobius Digital has once again proven that they are masters of their craft. Echoes of the Eye carries on the legacy of Outer Wilds by delivering a riveting narrative told in a beautiful new world, paired with excellent use of the main game’s mechanics to deliver its story.

Everything you wanted from an Outer Wilds DLC in a package you never thought to expect. Echoes of the Eye puts its own twists on the base game’s formula without a single misstep.

Zoom 1m 3m 1y All
Track product
EU STEAM CD KEY: Requires an EUROPEAN IP address or you must activate it with a VPN (Virtual Private Network) in order to play Outer Wilds Echoes of the Eye. Might have languages restrictions or language packs. Read the description on the store game page to know if the EU IP is only needed for activation or for playing also (maybe on EU Servers). Most of the stores offer you their help, or show you how to do this with a tutorial to follow.
EUROPEAN STEAM GIFT : It’s a steam gift for Europe which requires an European IP address to activate and to play Outer Wilds Echoes of the Eye on Steam. Read carefully the store description about region and language restrictions.
STEAM CD KEY : Use the Steam Key Code on Steam Platform to download and play Outer Wilds Echoes of the Eye. You must login to your Steam Account or create one for free. Download the (Steam Client HERE). Then once you login, click Add a Game (located in the bottom Left corner) -> Activate a Product on Steam. There type in your CD Key and the game will be activated and added to your Steam account game library.
STEAM KEY ROW : It means for Rest Of the World countries which are not concerned by the region restrictions. This product can't be purchased and activated in Several countries. Please read the store description to know the full list of countries which are concerned. Use the key to Download and play Outer Wilds Echoes of the Eye on Steam.
Steam EU/US : For Europe and United States of America
DLC
Limited Edition
Compare Choose & Buy Download (803)

This DLC takes everything from the base game, and through its own gameplay, it achieves to make the narrative be even better, making what was already a masterpiece shine even brighter. However, I must warn that everything in this DLC is made through fear. There is an option to reduce the frights, but the core of the experience will be tied to that feeling.