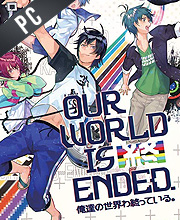 What is Our World Is Ended CD key?

It's a digital key that allows you to download Our World Is Ended directly to PC from the official Platforms.

How can I find the best prices for Our World Is Ended CD keys?

Allkeyshop.com compares the cheapest prices of Our World Is Ended on the digital downloads market to find the best sales and discount codes on trusted stores.

Our World Is Ended is an adventure video game that is developed by Red Entertainment and published by PQube Limited.

Play as part of a team of young developers called Judgement 7 which consists of Reiji, the director, Owari and Tatiana who are both programmers, Yuno the assistant, Natsumi the artist, Asano the musician and Iruka No. 2 the planner.

Together they create a new game engine that they called the W.O.R.L.D. program. This can change the landscape in real-time with the use of an Augmented Reality headset.

As Reiji is testing the program on the streets of Asakusa, he notices a glitch and it traps him and his team between the real world and the game’s fiction world. Every creature and character that they previously made are trying to cross over to the real world to become real beings.

They must put a stop to this and must do everything to bring the world back to what it was before.

Pre-Order: Our World is Ended + Day one edition

Be the first one to write a review about Our World Is Ended !