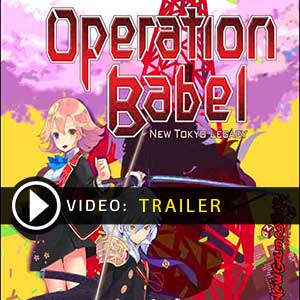 It's a digital key that allows you to download Operation Babel New Tokyo Legacy directly to PC from the official Platforms.

How can I find the best prices for Operation Babel New Tokyo Legacy CD keys?

Tokyo was finally experiencing peace due to the Xth Squad’s efforts. However, an unidentified object in the sky which they called ‘The Embryo’ seemed to start the chaos once again. Nobody can help except the Code Physics Agency’s Xth Squad.

The game features a brand new and mysterious adventure with the emergence of the Embryo. An extensive character customization is also available with the expansion of the Blood Code system this will allow you to create hybrid job classes. The Rise&Drop system is also making a comeback where players are able to recover increasingly powerful drops. There will also be item-attached skills and spells where you can perfect new skills and spells by equipping certain items.

You will surely be drawn to Operation Babel: New Tokyo Legacy’s story and gameplay! What are you waiting for? Get the game and play it now.

EU STEAM CD KEY: Requires an EUROPEAN IP address or you must activate it with a VPN (Virtual Private Network) in order to play Operation Babel New Tokyo Legacy. Might have languages restrictions or language packs. Read the description on the store game page to know if the EU IP is only needed for activation or for playing also (maybe on EU Servers). Most of the stores offer you their help, or show you how to do this with a tutorial to follow.
STEAM CD KEY : Use the Steam Key Code on Steam Platform to download and play Operation Babel New Tokyo Legacy. You must login to your Steam Account or create one for free. Download the (Steam Client HERE). Then once you login, click Add a Game (located in the bottom Left corner) -> Activate a Product on Steam. There type in your CD Key and the game will be activated and added to your Steam account game library.
Bundle
Limited Edition
Standard Edition