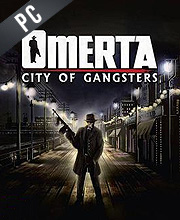 What is Omerta City Of Gansters CD key?

It's a digital key that allows you to download Omerta City Of Gansters directly to PC from the official Platforms.

How can I find the best prices for Omerta City Of Gansters CD keys?

Allkeyshop.com compares the cheapest prices of Omerta City Of Gansters on the digital downloads market to find the best sales and discount codes on trusted stores.

Omerta – City of Gangsters is a simulation game that comes with the option of a single-player or multiplayer. The game was developed by Haemimont Games and published by Kalypso Media.

It is set during 1920’s – The Roaring Twenties – during the time of the Prohibition in the United States. The story takes place in the City of Atlantic. In the Atlantic County, Mafia organizations were able to rise to power due to the ban of any alcohol in this era.

During this time, criminal groups rule the city and as well as a handful of morally questionable men were able to succeed in establishing their control through illegal transactions such as gambling, shady machinations and high-strength spirits.

The main character of the game is Boss D’Angelo. Who is an immigrant and was born in a small village in Sicily. Boss D’Angelo has to work his way up through the Mafia-like world, striving hard as he came from nothing.

The goal of the game is to have Boss D’Angelo establish himself in the criminal underground world by making illegal transactions, buying and raiding businesses and attacking rivals while fulfilling his version of the American dream. The task is not easy as Boss D’Angelo must face different enemies that ranges from independent gang clusters. Are you up for the challenge?

Zoom 1m 3m 1y All
Track product
Digital Key for MAC ONLY
PUBLISHER WEBSITE CD KEY: Use the CD Key Code to download directly on the Official Website or from the store to play Omerta City Of Gansters. Follow the instructions given by the store. Verify languages available and possible region restrictions before buying.
EU STEAM CD KEY: Requires an EUROPEAN IP address or you must activate it with a VPN (Virtual Private Network) in order to play Omerta City Of Gansters. Might have languages restrictions or language packs. Read the description on the store game page to know if the EU IP is only needed for activation or for playing also (maybe on EU Servers). Most of the stores offer you their help, or show you how to do this with a tutorial to follow.
STEAM GIFT : A Steam gift is a one-time transfer you receive. You activate and install Omerta City Of Gansters to play on Steam, it is a non-refundable game that stays in your Steam games collection. Please read the store description about any language or region restrictions.
STEAM CD KEY : Use the Steam Key Code on Steam Platform to download and play Omerta City Of Gansters. You must login to your Steam Account or create one for free. Download the (Steam Client HERE). Then once you login, click Add a Game (located in the bottom Left corner) -> Activate a Product on Steam. There type in your CD Key and the game will be activated and added to your Steam account game library.
STEAM KEY ROW : It means for Rest Of the World countries which are not concerned by the region restrictions. This product can't be purchased and activated in Several countries. Please read the store description to know the full list of countries which are concerned. Use the key to Download and play Omerta City Of Gansters on Steam.
Bundle
DLC
Gold Edition
Standard Edition
Compare Choose & Buy Download (803)

I think this game is really cool.
When the price of the goldpack drops a little further, i’m definitely gonna buy it
🙂