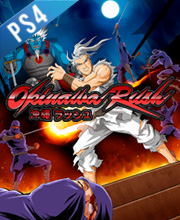 It's a digital key that allows you to download Okinawa Rush directly to Playstation 4 from PSN (Playstation network).

It pains me to say it, but I came away from Okinawa Rush with the sense that it’s a huge missed opportunity. The frustration of dealing with the timer quickly builds up and overshadows everything that the developers get right.