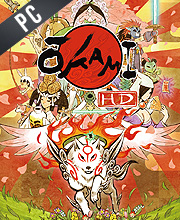 What is OKAMI HD CD key?

It's a digital key that allows you to download OKAMI HD directly to PC from the official Platforms.

How can I find the best prices for OKAMI HD CD keys?

Allkeyshop.com compares the cheapest prices of OKAMI HD on the digital downloads market to find the best sales and discount codes on trusted stores.

OKAMI HD is an action–adventure video game developed and published by CAPCOM Co.Ltd.

The 2006 original is making a comeback with Okami HD. Still with its breathtaking Sumi-e ink art style but now in high resolution. The modern widescreen format is also now available at 16:9 ratio, but players will still have a choice to switch back to the original 4:3 aspect ratio.

Players will get to play the Japanese sun goddess named Amaterasu who inhabits the body of a white wolf-like deity. She is on a journey to restore the world that had been claimed by evil. She will go after an eight-headed demon named Orochi who is spreading evil on the land.

The game looks amazing visually with interesting gameplay. It gives players a taste of Japanese folklore as well.

Play Okami HD and find out if the goddess Amaterasu can bring back peace to the land.

Zoom 1m 3m 1y All
Track product
STEAM EMEA KEY : What is Steam Key EMEA signification? EMEA means for Europe, Middle East and Africa and several other countries. Please read the store description about country and language restrictions to know which are concerned. Use the key to Download and play OKAMI HD on Steam.
EU STEAM CD KEY: Requires an EUROPEAN IP address or you must activate it with a VPN (Virtual Private Network) in order to play OKAMI HD. Might have languages restrictions or language packs. Read the description on the store game page to know if the EU IP is only needed for activation or for playing also (maybe on EU Servers). Most of the stores offer you their help, or show you how to do this with a tutorial to follow.
STEAM CD KEY : Use the Steam Key Code on Steam Platform to download and play OKAMI HD. You must login to your Steam Account or create one for free. Download the (Steam Client HERE). Then once you login, click Add a Game (located in the bottom Left corner) -> Activate a Product on Steam. There type in your CD Key and the game will be activated and added to your Steam account game library.
STEAM KEY ROW : It means for Rest Of the World countries which are not concerned by the region restrictions. This product can't be purchased and activated in Several countries. Please read the store description to know the full list of countries which are concerned. Use the key to Download and play OKAMI HD on Steam.
Bonus Edition
Standard Edition
Compare Choose & Buy Download (791)

Very nice game，hope to win the lottery. I like the style of this game.It’s special.

Okami is a great game,it’s a must play for Zelda-like fans. Best price on G2PLAY, is a really cheap and trustworthy choice

Everyday, winner can be someone else in the wolrd! thx everyday!

I’ve always wanted to play this game!! It looks amazing!! 😀