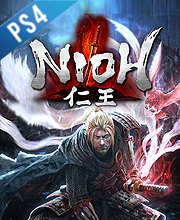 What is Nioh Game Code?

It's a digital key that allows you to download Nioh directly to Playstation 4 from PSN (Playstation network).

Allkeyshop.com compares the cheapest prices of Nioh on the digital downloads market to find the best sales and discount codes on trusted stores.

Set in the 16th century in the war-ravaged Japan, you will step into the shoes of a westerner samurai named William. William has been brought to this location in search of a particular enemy. However, the land is now tormented by so many demons called Yokai. You, as this blond-haired samurai must face off with the demons as well as the enemy samurai’s that abound.

William will have different fighting styles that he should master. Learning to play your character with utmost precision and understanding the flow of combat is key. There will be a wide array of weapons to choose from, all with different ranges as well as different combinations of attacks.

Offering its players a dark, original storyline that will keep you hooked on the game. An amazing and action packed gameplay awaits in this awesome game – Nioh!

PLAYSTATION ACCOUNT : You will receive a Playstation account to download and play Nioh. Once downloaded you can play with your own account. Follow the instructions given by the seller and read carefully the store description about any language and region restrictions.
ASIAN BOX GAME : This is an Asian import of Nioh in Box Edition (DVD-CD ROM). This is not a downloadable product. Please read the sellers page for any additional costs (taxes, shipping), delivery time for your country and languages available.
PLAYSTATION CODE : This a Playstation Game Code to download Nioh. Activate the code on the Playstation Network. Read carefully the store description about any language and region restrictions.
PLAYSTATION NETWORK USA : PSN Code for USA ONLY. You need an US PSN Account to add USD in your Virtual Wallet. Login to your Playstation Account, use the PSN Card Code (12 digit code) to add funds in PSN Wallet in your country currency USD / Dollar US / $ only. To add money on Playstation Network wallet you need the following components and services:
* PS4 / PS3 / PSP / PSVITA Console
* A broadband internet connection
* US Playstation Account
* A free Playstation Wallet
You can follow the store description on how to add currency on the PSN Account for more informations.
Complete Edition
Deluxe Edition
Standard Edition
Compare Choose & Buy Download (743)