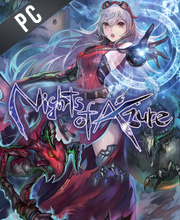 What is Nights of Azure CD key?

It's a digital key that allows you to download Nights of Azure directly to PC from the official Platforms.

How can I find the best prices for Nights of Azure CD keys?

Allkeyshop.com compares the cheapest prices of Nights of Azure on the digital downloads market to find the best sales and discount codes on trusted stores.

Nights of Azure is an action role playing video game. It has been developed by Gust and published by Koei Tecmo.

Set in the land where no one sleeps at night — Ruswell Island. You will be playing as Arnice who is half human and half monster. She is actually one of the holy knights. Her monster side came about when she had contact with the blood of the Ruler of the Night.

Arnice fights alongside demons called Servan. Since she is half demon and half human, she can summon these demon using SP. The demons have different categories, they could either be support or attack types. They also have the ability to level up and gain more abilities through battles.

Aside from the game’s main storyline a special battle arena is also available. Here she can join different changes in order to earn different rewards.

Nights of Azure will give a gameplay and storyline like no other, get to savour every minute of playing the game.

Zoom 1m 3m 1y All
Track product
EU STEAM CD KEY: Requires an EUROPEAN IP address or you must activate it with a VPN (Virtual Private Network) in order to play Nights of Azure. Might have languages restrictions or language packs. Read the description on the store game page to know if the EU IP is only needed for activation or for playing also (maybe on EU Servers). Most of the stores offer you their help, or show you how to do this with a tutorial to follow.
STEAM CD KEY : Use the Steam Key Code on Steam Platform to download and play Nights of Azure. You must login to your Steam Account or create one for free. Download the (Steam Client HERE). Then once you login, click Add a Game (located in the bottom Left corner) -> Activate a Product on Steam. There type in your CD Key and the game will be activated and added to your Steam account game library.
Standard Edition
Compare Choose & Buy Download (743)