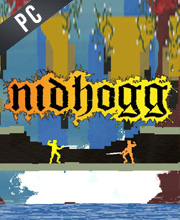 What is Nidhogg CD key?

It's a digital key that allows you to download Nidhogg directly to PC from the official Platforms.

How can I find the best prices for Nidhogg CD keys?

Allkeyshop.com compares the cheapest prices of Nidhogg on the digital downloads market to find the best sales and discount codes on trusted stores.

Nidhogg is a side-scrolling two-player action, fighting videogame developed and published by Mark “Messhof” Essen. Players duel with swords in a pixelated environment. This game features graceful acrobatics and clumsy stabs that will provoke a lot of real life yelling and excitement.

In Nidhogg you take up fencing and fight one on one matches against AI or other players through local or online multiplayer. The aim of the game is to make it past your opponent and run to the other side of the map.The combat arena stretches in both directions, although besting an opponent only gains you ground. Matches aren’t won or lost with a single kill, but with a series of kills granting you right-of-way to run/fight/flee to your own goal-zone.

A superb multiplayer game with some of the best virtual sword-fighting ever seen, giving you the best reason to crowd round a PC. Nidhogg is a game to be enjoyed with friends while in the same room together, and it may be the best title you’ll play in a very long time. A brilliant marriage of mechanics, level design and music that will be played and talked about for years to come.

Zoom 1m 3m 1y All
Track product
EU STEAM CD KEY: Requires an EUROPEAN IP address or you must activate it with a VPN (Virtual Private Network) in order to play Nidhogg. Might have languages restrictions or language packs. Read the description on the store game page to know if the EU IP is only needed for activation or for playing also (maybe on EU Servers). Most of the stores offer you their help, or show you how to do this with a tutorial to follow.
STEAM GIFT : A Steam gift is a one-time transfer you receive. You activate and install Nidhogg to play on Steam, it is a non-refundable game that stays in your Steam games collection. Please read the store description about any language or region restrictions.
STEAM CD KEY : Use the Steam Key Code on Steam Platform to download and play Nidhogg. You must login to your Steam Account or create one for free. Download the (Steam Client HERE). Then once you login, click Add a Game (located in the bottom Left corner) -> Activate a Product on Steam. There type in your CD Key and the game will be activated and added to your Steam account game library.
Standard Edition
Compare Choose & Buy Download (743)

A great party game with enough complexity to require skill, but enough simplicity to be picked up instantly.
The price point also is a plus!