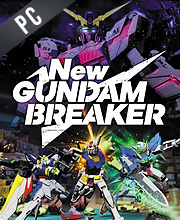 It's a digital key that allows you to download New Gundam Breaker directly to PC from the official Platforms.

How can I find the best prices for New Gundam Breaker CD keys?

Allkeyshop.com compares the cheapest prices of New Gundam Breaker on the digital downloads market to find the best sales and discount codes on trusted stores.

New Gundam Breaker is an action video game that is developed by Crafts & Meister Co., Ltd. and published by Bandai Namco Entertainment.

There will be onslaughts of enemies as well as big bosses! Defeat them all and gather all the Gunpla parts that you would need like weapons and shield to even legs, arms, and heads.

With all the Gunpla parts that you’ve collected, create your very own Gunpla that will suit the style of fighting that you’ve wanted. Players are able to customize their Gunpla on and off the battlefield. Swapping weapons and armor real-time on the battlefield is a thing!

You can play the game solo through its story mode or team up with other players in the 3v3 co-op mode. Get to fight alongside your friends as you collect the various parts that you need to secure the victory of your team.

STEAM CD KEY : Use the Steam Key Code on Steam Platform to download and play New Gundam Breaker. You must login to your Steam Account or create one for free. Download the (Steam Client HERE). Then once you login, click Add a Game (located in the bottom Left corner) -> Activate a Product on Steam. There type in your CD Key and the game will be activated and added to your Steam account game library.
STEAM KEY ROW : It means for Rest Of the World countries which are not concerned by the region restrictions. This product can't be purchased and activated in Several countries. Please read the store description to know the full list of countries which are concerned. Use the key to Download and play New Gundam Breaker on Steam.
Standard Edition