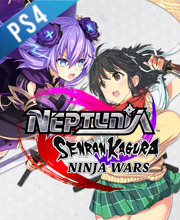 It's a digital key that allows you to download Neptunia x Senran Kagura Ninja Wars directly to Playstation 4 from PSN (Playstation network).

Neptunia x SENRAN KAGURA: Ninja Wars is a hack and slash action RPG where you pair up 10 characters and slice through enemy hordes, in this crossover game between the Neptunia franchise and Senran Kagura franchise developed by Idea Factory in collaboration with Compile Heart, and Tamsoft. As the struggle for control increased between the Daimyos of nations, tensions flare up between two great nations each of them home to a major school of martial arts. The Compa Style which has mastered the ninja arts based on the command technique, and the Honypa Style which has mastered the ninja arts rooted in the action technique as the two camps got bogged down in a ruthless competition of skills a mechanical army of ninjas showed up and attacked.

It won’t give players everything they’d expect from either franchise, it has satisfying systems and some of the funniest writing either series has seen in years. This is a good action-adventure, but for fans of either series, it’s absolutely essential.

Neptunia x Senran Kagura: Ninja Wars is the hyper-specific and ultra-niche crossover game I never thought I’d get. It’s a delight to see the Senran Kagura crew after so long, and it’s a blast to see the Neptunia girls in what is easily the most fun and satisfying to play spinoff in the series.