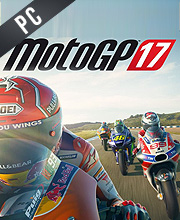 It's a digital key that allows you to download MotoGP 17 directly to PC from the official Platforms.

How can I find the best prices for MotoGP 17 CD keys?

Allkeyshop.com compares the cheapest prices of MotoGP 17 on the digital downloads market to find the best sales and discount codes on trusted stores.

“The future is on your wrist”. This is another adrenaline-inducing racing game offering optimal entertainment! This season, there are more than 70 legendary riders to choose from varying from different classes like 2 stroke 125cc, 2 stroke 250cc, 2 stroke 500cc, and 4 stroke. Try and experience all bikes, tracks, and riders in this newest season.

Choose from either a Rider career or a Managerial career. As a Rider, you must win races and gain reputation with the ultimate goal of winning the MotoGP Championship. As a manager, you must create your team, manage rides and compete in races.

EU STEAM CD KEY: Requires an EUROPEAN IP address or you must activate it with a VPN (Virtual Private Network) in order to play MotoGP 17. Might have languages restrictions or language packs. Read the description on the store game page to know if the EU IP is only needed for activation or for playing also (maybe on EU Servers). Most of the stores offer you their help, or show you how to do this with a tutorial to follow.
STEAM GIFT : A Steam gift is a one-time transfer you receive. You activate and install MotoGP 17 to play on Steam, it is a non-refundable game that stays in your Steam games collection. Please read the store description about any language or region restrictions.
STEAM CD KEY : Use the Steam Key Code on Steam Platform to download and play MotoGP 17. You must login to your Steam Account or create one for free. Download the (Steam Client HERE). Then once you login, click Add a Game (located in the bottom Left corner) -> Activate a Product on Steam. There type in your CD Key and the game will be activated and added to your Steam account game library.
Standard Edition

The past 2 motoGP games, VR46 and MotoGP17 have been a massive improvement on games before. Each year they have tried to add something completely new as well as the updated riders, teams and bikes.