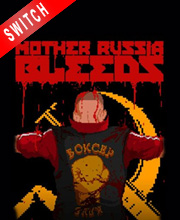 It's a digital key that allows you to download Mother Russia Bleeds directly to Nintendo Switch directly from Nintendo eShop.

How can I find the best prices for Mother Russia Bleeds on Nintendo Switch ?

Allkeyshop.com compares the cheapest prices of Mother Russia Bleeds on the digital downloads market to find the best sales and discount codes on trusted stores.

Mother Russia Bleeds is a brutal co-op brawler that is violent to the core. It is the 1980’s and located in an alternate Soviet Union. Four street brawlers escape prison, all of them under the influence of a Russian Mafia’s new drug. While still struggling with their addiction, the crew pursues to find out the secrets of the drug as well as the link between the Russian Mafia and authorities.

Mother Russia Bleeds is an unapologetically offensive but well-executed brawler that on its face, only a mother could love. If you enjoy the violent or obscene, aren’t squeamish, and are looking to bust skulls with reckless abandon, it’s one of the better playing and looking offerings on Switch today.

Mother Russia Bleeds is violent and gory and definitely not for everyone, but tells an enjoyable pocket-sized story while it lasts.

This edition comes with the base game, the game’s soundtrack plus a behind-the-scenes video.

Zoom 1m 3m 1y All
Track product
NINTENDO CODE : This is a digital code for Mother Russia Bleeds. Use the download code on the Nintendo eShop of your Console. Once connected to the Nintendo eShop, you can enter and redeem the Download Code. Read carefully the store description about any language and region restrictions.
Standard Edition
Compare Choose & Buy Download (743)