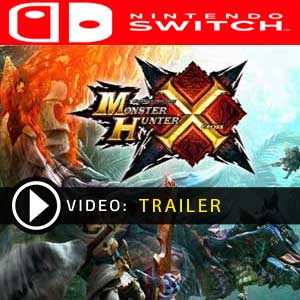 It's a digital key that allows you to download Monster Hunter XX directly to Nintendo Switch directly from Nintendo eShop.

How can I find the best prices for Monster Hunter XX on Nintendo Switch ?

Allkeyshop.com compares the cheapest prices of Monster Hunter XX on the digital downloads market to find the best sales and discount codes on trusted stores.

Monster Hunter XX is an action role-playing video game that is developed and published by Capcom. This is the expanded version of the Monster Hunter Generations game.

This expanded version will include new monsters, new content as well as new quests. The first release of the game was for 3DS and is later launched for Nintendo Switch that includes a high-res visuals upgrade and an online cross-play option with 3DS.

As mentioned earlier cross-play is available, 3DS game saves can be transferred to the Switch version of the game, however that option is not available vice-versa. The Nintendo Switch will support up to 1080p resolution. Players are able to play the game handheld or even attached to the TV. Play with four of your friends on either local or via the internet play.

Get to go on another epic adventure with Monster Hunter XX! Play at home or bring the gameplay outside with your Nintendo Switch!