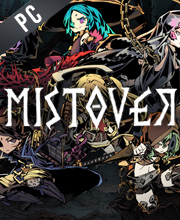 What is MISTOVER CD key?

It's a digital key that allows you to download MISTOVER directly to PC from the official Platforms.

How can I find the best prices for MISTOVER CD keys?

Allkeyshop.com compares the cheapest prices of MISTOVER on the digital downloads market to find the best sales and discount codes on trusted stores.

Mistover is an action, strategy, role-playing video game that is developed and published by Krafton, Inc.

The Pillar of Despair which is a vortex has unexpectedly appeared out of nowhere. With it, came dreadful creatures that left the world in despair, almost pushing mankind into extinction. However, one day, all of the creatures suddenly disappeared.

The occurrence did not put the survivors at ease though and they created a group called ‘Corps’. This group is tasked to enter the vortex and find out what happened. And also to make sure that what happened before will not repeat itself.

Inside the Pillar of Despair, you will have to deal with internal conflicts. There will also be limited visibility inside that could hinder your exploration. Make sure to take care of your crew as they only have one life.

Offering 40 hours of expeditions scattered in 5 distinct regions. The maps are always changing, so practice different strategies in order to survive. Build the strongest Corps that you could muster and choose from the 8 different Corps classes. There are all-new skills to learn as well as equipment to upgrade.

Enter the Pillar of Despair in Mistover and make sure to come out alive.

Zoom 1m 3m 1y All
Track product
GOG.COM CD KEY : You need to register on Gog.com, then use the GOG Key to download and activate your game to play MISTOVER.
STEAM CD KEY : Use the Steam Key Code on Steam Platform to download and play MISTOVER. You must login to your Steam Account or create one for free. Download the (Steam Client HERE). Then once you login, click Add a Game (located in the bottom Left corner) -> Activate a Product on Steam. There type in your CD Key and the game will be activated and added to your Steam account game library.
Standard Edition
Compare Choose & Buy Download (803)

Great game with a few distinguishing features from the Darkest Dungeon, such as 3×3 grid position based combat, a grid-based dungeon exploration system, RNG-based weapon/accessory enhancements which will allow you to build for optimal damage, defense, or utility. Definitely worth giving it a shot if you want to play something similar to Darkest Dungeon, but with slight variances to give it a unique flavor.