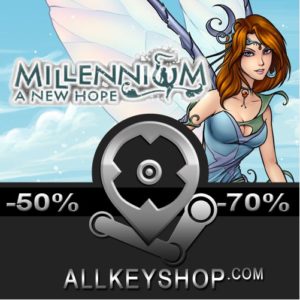 What is Millennium A New Hope CD key?

It's a digital key that allows you to download Millennium A New Hope directly to PC from the official Platforms.

How can I find the best prices for Millennium A New Hope CD keys?

Allkeyshop.com compares the cheapest prices of Millennium A New Hope on the digital downloads market to find the best sales and discount codes on trusted stores.

It is set in a fantasy medieval world where players take control of a young peasant girl named Marine. Several other characters join her later in the game and in the sequels. There are five games in the series. All the games in the series were made with RPG Maker XP and are designed so they can either be played as stand-alone or importing savefiles from one game to another.

The series’s gameplay and visuals are similar to 2D role-playing video games like the classic Final Fantasy and Dragon Quest games. It features mouse control, difficulty choice, visible or invisible monsters, in-game tutorial, and numerous sidequests. Each game can be downloaded individually, but save games can be transferred from one game to the next, allowing players to keep their inventory.

There are five episodes in the series. Millennium 5 is the final episode:

STEAM CD KEY : Use the Steam Key Code on Steam Platform to download and play Millennium A New Hope. You must login to your Steam Account or create one for free. Download the (Steam Client HERE). Then once you login, click Add a Game (located in the bottom Left corner) -> Activate a Product on Steam. There type in your CD Key and the game will be activated and added to your Steam account game library.
Standard Edition