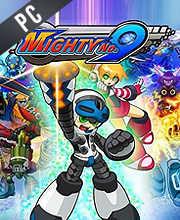 What is MIGHTY NO.9 CD key?

It's a digital key that allows you to download MIGHTY NO.9 directly to PC from the official Platforms.

How can I find the best prices for MIGHTY NO.9 CD keys?

Allkeyshop.com compares the cheapest prices of MIGHTY NO.9 on the digital downloads market to find the best sales and discount codes on trusted stores.

MIGHTY NO. 9 is a Japanese 2D action game developed by Comcept and Inti Creates and published by Deep Silver.

As with classic Japanese arcade games, MIGHTY NO. 9 has a side-scrolling action that also takes classic elements from 8 and 16-bit games and are merged with modern mechanics, giving the game a fresh new look and feel.

You will play as Beck, the 9th robot from the robot siblings created by Dr. White known as the Mighty Numbers. The Mighty Numbers are the most popular team of robots in the Battle Colosseum (a government sponsored public robot battle competition) and also considered the most powerful.

However, an act of cyber terror during one competition infected them with a computer virus which caused them to become crazed robots, taking control of various key facilities and utilities in the world. Being the weakest robot out of the siblings, and also being the only one unaffected by the virus, Beck is given the task of saving all of humanity.

MIGHTY NO. 9 features 12 challenging stages in single-player campaign with dozens of mini missions to fully test your action platforming skills. Unlock the New Game+ mode and get two additional extra difficult levels for those who are up for an even mightier challenge. You can also play with friends in the 2-player Co-op Challenge Mode and take on dozens of online missions, or compete online in a head-to-head battle in the 2-player Online Race Battle.

Action-packed, fun, and engaging. MIGHTY NO. 9 is definitely worth every cent. Go get it now!

Zoom 1m 3m 1y All
Track product
EU STEAM CD KEY: Requires an EUROPEAN IP address or you must activate it with a VPN (Virtual Private Network) in order to play MIGHTY NO.9. Might have languages restrictions or language packs. Read the description on the store game page to know if the EU IP is only needed for activation or for playing also (maybe on EU Servers). Most of the stores offer you their help, or show you how to do this with a tutorial to follow.
STEAM CD KEY : Use the Steam Key Code on Steam Platform to download and play MIGHTY NO.9. You must login to your Steam Account or create one for free. Download the (Steam Client HERE). Then once you login, click Add a Game (located in the bottom Left corner) -> Activate a Product on Steam. There type in your CD Key and the game will be activated and added to your Steam account game library.
Standard Edition
Compare Choose & Buy Download (743)

I still will buy this game! New Megaman all the way! Need to finish some games first, though.

The best site to buy Mighty NO. 9 is instant gaming.

instant gaming is the best store to buy a MIGHTY NO.9 CD key

Instantgaming has the best price avalib for this game! Freaking awesome!!!