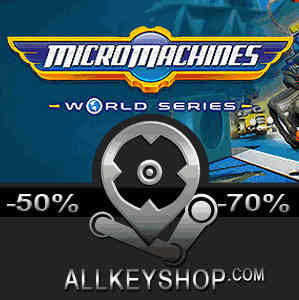 It's a digital key that allows you to download Micro Machines World Series directly to PC from the official Platforms.

How can I find the best prices for Micro Machines World Series CD keys?

Allkeyshop.com compares the cheapest prices of Micro Machines World Series on the digital downloads market to find the best sales and discount codes on trusted stores.

Micro Machines World Series is a racing video game that is developed and published by Codemasters.

Choose your micro machine then one of the 10 race tracks can be found in the everyday home like the kitchen, garden, workshop, pool table and so much more. Customizations are also available and there are a lot to choose from.

No two races are guaranteed to be the same because of the interactive playsets like giant fans, teleporters, and catapults to name a few.

Battle modes can now hold up to 12 players with multiple modes to guarantee ultimate player satisfaction. Join team plays and go at it as a team.

Online and offline multiplayer is also available check out the leaderboards, challenges, seasons, and so much more.

Join in on the madness of Micro Madness World Series.

STEAM CD KEY : Use the Steam Key Code on Steam Platform to download and play Micro Machines World Series. You must login to your Steam Account or create one for free. Download the (Steam Client HERE). Then once you login, click Add a Game (located in the bottom Left corner) -> Activate a Product on Steam. There type in your CD Key and the game will be activated and added to your Steam account game library.
Standard Edition

Great to see an old school racing game coming back. From the gameplay videos it’s like V3 but with HD graphics! 😀

Great game! Really cant wait to play it. I think its really good