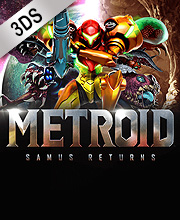 It's a digital key that allows you to download Metroid Samus Returns directly to Nintendo 3DS directly from Nintendo eShop.

How can I find the best prices for Metroid Samus Returns on Nintendo 3DS ?

Allkeyshop.com compares the cheapest prices of Metroid Samus Returns on the digital downloads market to find the best sales and discount codes on trusted stores.

Metroid Samus Returns is an action adventure video game developed by MercurySteam and Nintendo EPD and published by Nintendo. This is the reimagining of the classic game Metroid II: Return Samus from 1991.

This Gameboy game from 1991 is making a comeback with the same story and structure however with all new visuals, gameplay, and controls. Players are now able to play this side-scrolling game in a two-dimensional plane but with three-dimensional graphics.

New features available in the game include the ability of Samus to do a melee counter attack that can deal critical damage on enemies. Also, firing now is available at any angle. New Aeion abilities are also available which are a selection of new powers that rely on an energy gauge.

As Samus, you must exterminate the parasitic Metroids that has invaded your home planet of SR388. The Galactic Federation is asking for your help to kill these threats.

Zoom 1m 3m 1y All
Track product
BOX GAME : This is Metroid Samus Returns Box Edition (DVD-CD ROM). This is not a downloadable product. Please read the sellers page for any additional costs (taxes, shipping), delivery time for your country and languages available.
NINTENDO CODE : This is a digital code for Metroid Samus Returns. Use the download code on the Nintendo eShop of your Console. Once connected to the Nintendo eShop, you can enter and redeem the Download Code. Read carefully the store description about any language and region restrictions.
Standard Edition
Compare Choose & Buy Download (772)