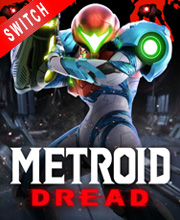 What is Metroid Dread Game Code?

It's a digital key that allows you to download Metroid Dread directly to Nintendo Switch directly from Nintendo eShop.

How can I find the best prices for Metroid Dread on Nintendo Switch ?

Allkeyshop.com compares the cheapest prices of Metroid Dread on the digital downloads market to find the best sales and discount codes on trusted stores.

Metroid Dread is a 2D action-adventure game developed by the Spanish Game Studio MercurySteam who made the previous entry in the franchise Metroid: Samus Returns remake. After the events of Metroid Fusion, the once thought extinct Parasite X has resurfaced on the remote planet of ZDR, initially the Galactic Federation sent a group of E.M.M.I. Robots to the planet to try and capture the Parasite but after failing to report back they assumed the worst, the only person they can turn to now is the only human immune to the parasite.

Metroid Dread is the sort of game worth the decade-plus it took to arrive. The new Nintendo Switch OLED model, which I reviewed, it’s also an absolute show pony. At least in handheld form. But to be honest, I spent most of the time playing on a larger screen if only to enjoy the game’s stunning art.

Metroid Dread is an instant classic. Its seamless blend of exploration, combat, puzzle-solving, and light touches of the story creates one of the most engaging experiences on Nintendo Switch. Samus Aran’s journey has been through its ups and downs, but the mesospheric high of Metroid Dread is evidence there is so, so much more left for the bounty hunter to accomplish.

The Special Edition includes the base game, steel book, art cards, and an artbook!