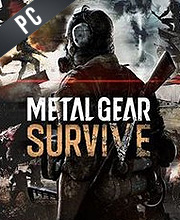 It's a digital key that allows you to download Metal Gear Survive directly to PC from the official Platforms.

How can I find the best prices for Metal Gear Survive CD keys?

Allkeyshop.com compares the cheapest prices of Metal Gear Survive on the digital downloads market to find the best sales and discount codes on trusted stores.

Metal Gear Survive is an action adventure survival video game developed by Konami Digital Entertainment and published by Konami. This is the very first game that is developed ever since Hideo Kojima left Konami.

The game is set between the period of Metal Gear V: Ground Zeroes and Metal Gear Solid V: The Phantom Pain. A wormhole opens up in the sky right after the evacuation of Big Boss and Kazuhira Miller from the Mother Base. The huge wormhole swallows up the whole offshore plant as well as what is left of the Militaires Sans Frontieres soldiers. Both the Mother Base or what is left of it, as well as the soldiers, are transported to an alternate reality that is quite hostile. This alternate universe is like no other, it is dangerous with crystalline zombie-like beings called “Creatures” roaming around.

There is nothing else to do but to survive. You would have to scour the area with whatever materials that you can find in order to live as well as, if possible, go back home to your world.

Will you survive and get to go home to your own world, or will the “Creatures” be very overwhelming?

EU STEAM CD KEY: Requires an EUROPEAN IP address or you must activate it with a VPN (Virtual Private Network) in order to play Metal Gear Survive. Might have languages restrictions or language packs. Read the description on the store game page to know if the EU IP is only needed for activation or for playing also (maybe on EU Servers). Most of the stores offer you their help, or show you how to do this with a tutorial to follow.
STEAM CD KEY : Use the Steam Key Code on Steam Platform to download and play Metal Gear Survive. You must login to your Steam Account or create one for free. Download the (Steam Client HERE). Then once you login, click Add a Game (located in the bottom Left corner) -> Activate a Product on Steam. There type in your CD Key and the game will be activated and added to your Steam account game library.
STEAM KEY ROW : It means for Rest Of the World countries which are not concerned by the region restrictions. This product can't be purchased and activated in Several countries. Please read the store description to know the full list of countries which are concerned. Use the key to Download and play Metal Gear Survive on Steam.
Bundle
Standard Edition

Metal Gear Solid Survive is a solid game, no pun intended in this statement…at all hahaha

Thank you allkeyshop.com family for all these good deals. I suggest to everyone please check here before by a game

CDKeys and Gamivo are having the cheapest prices lately, Would get a steam key of metal gear survive from one of them probably!

There’s a lot of stabbing zombies with spears and slowly collecting “kuban” energy. Hopefully something the developers add can adjust or speed up that mechanic.