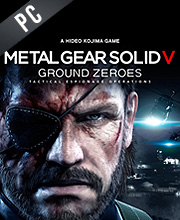 It's a digital key that allows you to download Metal Gear Solid 5 Ground Zeroes directly to PC from the official Platforms.

How can I find the best prices for Metal Gear Solid 5 Ground Zeroes CD keys?

Metal Gear Solid V: Ground Zeroes is an action–adventure video game which is a part of a sub-series of prequels in the Metal Gear series developed by Kojima Productions and published by Konami.

You will play as Snake throughout the game and try to accomplish missions while avoiding being spotted and captured by the enemy inside Camp Omega. Snake is sent to sneak inside the Camp to extract Paz Ortega Andrade who is presumed to be dead but was confirmed to be held as a captive inside, and Ricardo “Chico” Valenciano Libre who was sent to rescue her and is similarly captured.

Snake would soon realize the value in rescuing Paz, as he understands that by doing so will persuade Cipher to cede while Paz will be prepared to tell all of Cipher’s activities with MSF.

Ground Zeroes consists a total of seven missions, locked at individual levels. After completing the main mission, four subsequent missions, or side ops, will unlock – all set inside Camp Omega. The player should gather classified information and get rid of specfic targets on every mission.

After achieving a certain objective in the main mission, the player may unlock two additional “Extra Op” missions. With this more intricate era for Metal Gear, it will surely give you an exciting and action packed experience for hours.

I bought it from Cdkeys. Works Perfect, I recieved the key in a moment! 5/5

Very good game and a awesome prologue to Metal Gear Solid V: The Phantom Pain. Would be a good addition to Steamkeybox tier 1C or 5C. 😀

Many people call this a demo, but it has more content than you’d think. A worthwhile game.

I love all the mgs serries and speceially this with its good grapchis and the nice game story.