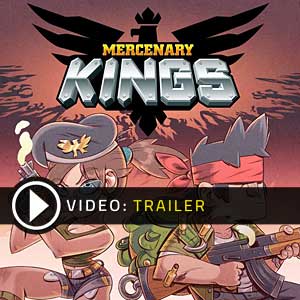 What is Mercenary Kings CD key?

It's a digital key that allows you to download Mercenary Kings directly to PC from the official Platforms.

How can I find the best prices for Mercenary Kings CD keys?

Allkeyshop.com compares the cheapest prices of Mercenary Kings on the digital downloads market to find the best sales and discount codes on trusted stores.

Mercenary Kings is a side-scrolling shoot ’em up action videogame developed and published by Tribute Games. The game was funded by Kickstarter.

Mercenary Kings is a side-scrolling shoot ’em up/run ‘n gun similar to games such as Metal Slug. Players fight against hordes of different types of enemies, bosses, achieve certain objectives, and rescue hostages. Players have the ability to craft their arsenal of weapons and upgrade their armor, as well play alongside other players, locally or online.

The game features up to 4 player coop and a vast array of weapons and customization options. Killing bad guys, blowing stuff up, rescuing prisoners and fighting large bosses are all part of the many missions players can undertake. The missions themselves unlock as the player ranks up and take place in different areas of an island controlled by the evil antagonist.

Whenever the currently equipped weapon spends all its bullets, or at the tap of a button, a small bar appears above the player character. Tapping the reload button when the gauge is green yields greater damage for the next magazine. Hitting the wrong area causes the weapon to delay in its reloading.

STEAM GIFT : A Steam gift is a one-time transfer you receive. You activate and install Mercenary Kings to play on Steam, it is a non-refundable game that stays in your Steam games collection. Please read the store description about any language or region restrictions.
STEAM CD KEY : Use the Steam Key Code on Steam Platform to download and play Mercenary Kings. You must login to your Steam Account or create one for free. Download the (Steam Client HERE). Then once you login, click Add a Game (located in the bottom Left corner) -> Activate a Product on Steam. There type in your CD Key and the game will be activated and added to your Steam account game library.
Limited Edition
Pack X4
Standard Edition
Compare Choose & Buy Download (583)