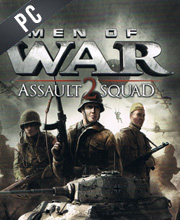 What is Men of War Assault Squad 2 CD key?

It's a digital key that allows you to download Men of War Assault Squad 2 directly to PC from the official Platforms.

How can I find the best prices for Men of War Assault Squad 2 CD keys?

Allkeyshop.com compares the cheapest prices of Men of War Assault Squad 2 on the digital downloads market to find the best sales and discount codes on trusted stores.

The Men of war series are great WW2 RTS games, reasonably realistic, balanced and historically accurate when compared to other similar games in the genre. The game is both fun and challenging, with an added educational aspect with the inclusion of units, vehicles, and weapons of which may help you gain a better understanding of their roles in the second world war.

An entirely new feature to Assault Squad 2 is the soldiers now gather experience for their actions, increasing their effectiveness on the battle field. With enhanced game speed control function, the ability to scale several different speeds during the game is a great feature, presenting a better micromanaging experience.

Massive amount of different content and features. All types of tanks, APCs, various classes of infantry, artillery. Direct unit control. If you love WW2 war games then this game is for you!

EU STEAM CD KEY: Requires an EUROPEAN IP address or you must activate it with a VPN (Virtual Private Network) in order to play Men of War Assault Squad 2. Might have languages restrictions or language packs. Read the description on the store game page to know if the EU IP is only needed for activation or for playing also (maybe on EU Servers). Most of the stores offer you their help, or show you how to do this with a tutorial to follow.
STEAM CD KEY : Use the Steam Key Code on Steam Platform to download and play Men of War Assault Squad 2. You must login to your Steam Account or create one for free. Download the (Steam Client HERE). Then once you login, click Add a Game (located in the bottom Left corner) -> Activate a Product on Steam. There type in your CD Key and the game will be activated and added to your Steam account game library.
Bundle
Collector Edition
Complete Edition
Complete Bundle
Deluxe Edition
Gold Edition
Limited Edition
Standard Edition
Compare Choose & Buy Download (689)