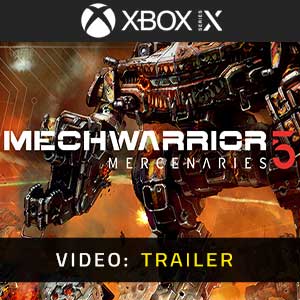 What is MechWarrior 5 Mercenaries Game Code?

It's a digital key that allows you to download MechWarrior 5 Mercenaries directly to Xbox Series X from Xbox Live.

How can I find the best prices for MechWarrior 5 Mercenaries on Xbox Series X ?

Allkeyshop.com compares the cheapest prices of MechWarrior 5 Mercenaries on the digital downloads market to find the best sales and discount codes on trusted stores.

The Inner Sphere is a large area of space where humanity has inhabited hundreds of star systems. Humanity has once more divided into diverse factions that are all seeking for domination, and the era of cooperation and advancement that once characterized the species is now a dim memory.

If you’re a fan of massive death machines, explosions, and a dab of entrepreneurship, MechWarrior 5: Mercenaries will appease your unique trio of interests. There are also enough mechs, customization tools, mission types, and environments to keep gameplay from becoming too repetitive. Lastly, although I wasn’t emotionally attached to the story, it was still entertaining enough.

The Jumpship Edition includes the following:

Join forces with the Independent People of Skye in a five-mission quest line to seize the Hatchetman, the newest BattleMech for the Lyran Commonwealth.

With 14 additional campaign missions, you can engage in combat in engagements that are based on the infamous Inner Sphere struggle and experience the 4th Succession War firsthand.

Find all the best prices for MechWarrior 5 Mercenaries DLCs on Allkeyshop!