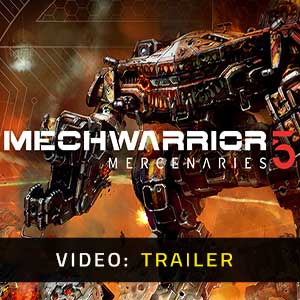 What is MechWarrior 5 Mercenaries Game Code?

It's a digital key that allows you to download MechWarrior 5 Mercenaries directly to Xbox One from Xbox Live.

How can I find the best prices for MechWarrior 5 Mercenaries on Xbox one?

Allkeyshop.com compares the cheapest prices of MechWarrior 5 Mercenaries on the digital downloads market to find the best sales and discount codes on trusted stores.

The Inner Sphere is a large area of space where humanity has inhabited hundreds of star systems. Humanity has once more divided into diverse factions that are all seeking for domination, and the era of cooperation and advancement that once characterized the species is now a dim memory.

MechWarrior 5: Mercenaries is no doubt among the best Xbox platform exclusives of 2021, and a staggering showcase for your console of choice. It manages to translate an ambitious PC epic almost seamlessly into a console experience, where the play mechanics and control scheme are mapped perfectly onto the Xbox controller.

It might be overwhelming for newcomers, but stick with it and MechWarrior 5: Mercenaries offers some surprisingly deep and rewarding giant robot combat. The management side might confuse, but stick with it, and you’ll enjoy the ups and down of mercenary life.

The Jumpship Edition includes the following:

Join forces with the Independent People of Skye in a five-mission quest line to seize the Hatchetman, the newest BattleMech for the Lyran Commonwealth.

With 14 additional campaign missions, you can engage in combat in engagements that are based on the infamous Inner Sphere struggle and experience the 4th Succession War firsthand.

Find all the best prices for MechWarrior 5 Mercenaries DLCs on Allkeyshop!

EU XBOX ONE GAME CODE : Xbox Live Game Code for EUROPE ONLY. Use the Digital Code received by mail in your Xbox One account to download MechWarrior 5 Mercenaries from the Xbox Live. Internet connection is required. Please read the store description about any language or region restrictions.
PC Win 10 / Xbox Key. Digital code which allows you to play on both Xbox and Windows 10 PC. See below for more informations.
JumpShip Edition
Standard Edition
Compare Choose & Buy Download (723)