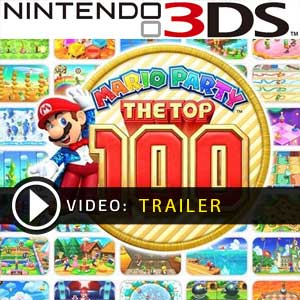 What is Mario Party The Top 100 Game Code?

It's a digital key that allows you to download Mario Party The Top 100 directly to Nintendo 3DS directly from Nintendo eShop.

How can I find the best prices for Mario Party The Top 100 on Nintendo 3DS ?

Allkeyshop.com compares the cheapest prices of Mario Party The Top 100 on the digital downloads market to find the best sales and discount codes on trusted stores.

Mario Party: The Top 100 is a party, multiplayer video game that is published and developed by Nintendo.

Get ready for the ultimate Mario Party! Mario Party will have you and three of your friends playing 100 mini-games that were available in the Mario Party series. Some games were originals that were graphically enhanced and some were actually reworked in order to function properly for Nintendo Switch.

There are different modes to play through like the Mini-game Match where the players would collect coins and stars while taking turns with other players as you move around the board map. The Mini-game Island will have you and the other players go through a linear path of mini-games and the Free Play Mode where you can freely choose which mini-game you would want to play.

Not all of the mini-games are available at first. Players must play through the Mini-game Island in order to unlock 24 mini-games out of the 100.

With Nintendo Switch’s Download Play, you can play with up to four players with their very own systems with just one game card.