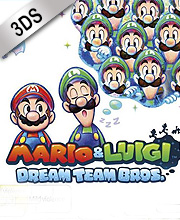 It's a digital key that allows you to download Mario & Luigi Dream Team Bros directly to Nintendo 3DS directly from Nintendo eShop.

How can I find the best prices for Mario & Luigi Dream Team Bros on Nintendo 3DS ?

In this adventure combining your two favorite plumbers as they try to prevent bowser from joining forces with antasma, the bat king, and from stealing the dream stone which will makes all wishes of the user come true. New characters such as Prince Dreambert is introduced. Mario and Luigi travel through the dream world to stop Bowser.

After finishing the initial tutorials the gameplay has been praised as creative and extremely entertaining with the soundtrack, is said to be the best of the series so far. With hours of entertainment, be sure to enjoy this dreamy adventure with your friends.