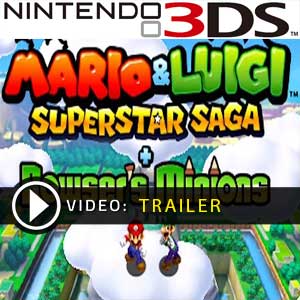 It's a digital key that allows you to download Mario and Luigi Superstar Saga + Bowsers Minions directly to Nintendo 3DS directly from Nintendo eShop.

How can I find the best prices for Mario and Luigi Superstar Saga + Bowsers Minions on Nintendo 3DS ?

Allkeyshop.com compares the cheapest prices of Mario and Luigi Superstar Saga + Bowsers Minions on the digital downloads market to find the best sales and discount codes on trusted stores.

Mario and Luigi: Superstar Saga + Bowser’s Minions is an action–adventure role-playing video game. This is developed by Alphadream and published by Nintendo.

In this renewed classic, journey through the Beanbean Kingdom and recover the stolen voice of Princess Peach by guiding Mario and Luigi simultaneously, and make use of their unique Bros moves to solve the puzzles that lie ahead and emerge victorious in action-packed battles.

Pay attention to the enemy’s movements and plan your attack to land satisfying counter-blows. A special mission is included in this remake and that is Minion Quest: The Search for Browser, and adventure which unfolds alongside the Superstar Saga story. Bowser’s army has been scattered across the Beanbean kingdom and his troops have been brainwashed, and Bowser is nowhere to be found. Recruit characters and grow your own Minion army while locating the missing leader. Mario and Luigi have different techniques known as Bro Moves, it has the ability to solve puzzles as you progress in the game. Skillfully dodge enemy blows and ensure to execute a timely attack to inflict greater damage in battle by utilizing Bros Attacks. Compatible with amiibo figures from the Super Mario series.