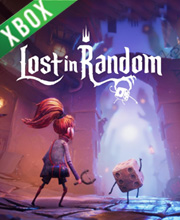 What is Lost in Random Game Code?

It's a digital key that allows you to download Lost in Random directly to Xbox One from Xbox Live.

How can I find the best prices for Lost in Random on Xbox one?

Allkeyshop.com compares the cheapest prices of Lost in Random on the digital downloads market to find the best sales and discount codes on trusted stores.

Lost in Random is an Action-adventure game with light deck-building aspects developed by Zoink, and Thunderfull the same team behind the critically acclaimed “it takes two”. Once upon a time, in the magical kingdom of random, there lived a queen who possesses the only die left in the kingdom the “black die”. By the Queen’s decree every citizen in the kingdom when they turn 12 rolls a 6-sided die, this will determine their social status and where they will live. You play as a girl named Even living on Onecroft but when your sister Odd turned 12, she managed to roll a 6 although a good thing you can’t help but feel uneasy, a year has passed, and Even has every reason to believe that Odd is in danger. After finding another magical dice, you begin your journey to finding your sister no matter the cost.