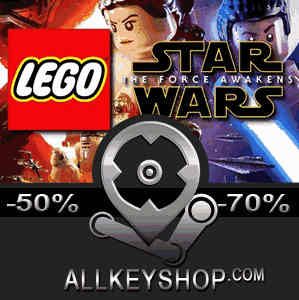 What is LEGO Star Wars The Force Awakens CD key?

It's a digital key that allows you to download LEGO Star Wars The Force Awakens directly to PC from the official Platforms.

How can I find the best prices for LEGO Star Wars The Force Awakens CD keys?

Allkeyshop.com compares the cheapest prices of LEGO Star Wars The Force Awakens on the digital downloads market to find the best sales and discount codes on trusted stores.

The game features the storylines of the blockbuster film retold in the Lego World. In addition to that get to take the adventures between Star Wars: Episode VI: Return of the Jedi and Star Wars: The Force Awakens in their exclusive story levels.

A new “multi-build” feature is also available giving you the ability to build and rebuild. Exciting and intense blaster battles as well as intense dogfights in outer space also awaits you in the game.

Get to command the iconic characters and vehicles in the game. The characters include Rey, Finn, Poe Dameron, Han Solo, Chewbacca, C-3PO and BB-8 also with Kylo Ren, General Hux and Captain Phasma. Explore the amazing locations in Star Wars like Starkiller Base and Jakku using their iconic vehicles.

Be the first one to write a review about LEGO Star Wars The Force Awakens !

Best store and best game ilove you
Thank you allkeyshop

Seems like another great LEGO game, LEGO games are very fun to play with friends/family in co-op 🙂

steam summer sale is on!!!! go and buy in allkeyshop

Definitely I would buy it on CDKeys.com I’ve bought stuff there very cheap and they are trusted with no complications very good site to buy this one.

I think that the best store to buy the key is on cdkeys.com