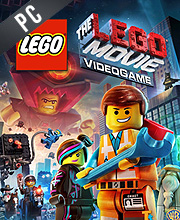 It's a digital key that allows you to download LEGO Movie Videogame directly to PC from the official Platforms.

How can I find the best prices for LEGO Movie Videogame CD keys?

Allkeyshop.com compares the cheapest prices of LEGO Movie Videogame on the digital downloads market to find the best sales and discount codes on trusted stores.

Lego The Movie Videogame is an action–adventure videogame developed by TT Games as part of the Lego series of video games. It follows the plot of the animated film The Lego Movie. The game was published by Warner Bros. Interactive Entertainment.

Continuing the trend of gameplay from previous Lego titles by TT Games, the game puts players in control of various characters from the movie, making use of Lego pieces to make their way through several levels. For the first time in the series, environments are completely made out of Lego pieces.

The game introduces two new main character types: Regular Builders (such as Emmet in earlier levels) and Master Builders (such as Batman, Benny, Princess Uni-Kitty, Vitruvius, and Wyldstyle). Regular Builders are unable to normally construct objects out of piles of Lego pieces and instead require instruction pages that are found throughout each level for the construction worker characters to use. Use these players and follow the instructions to build objects with specific pieces like real-life LEGO sets.

Master Builders, on the other hand, have the ability to grab Lego pieces from the environment and use them to create something new. While Lord Business is known for using switches in either his Lord Business form or his President Business form, other known abilities for each of the characters include fixing machinery, hacking into computers, destroying gold bricks with lasers, destroying silver bricks with rockets or dynamite, starting fires, and putting out fires.

Zoom 1m 3m 1y All
Track product
EU STEAM CD KEY: Requires an EUROPEAN IP address or you must activate it with a VPN (Virtual Private Network) in order to play LEGO Movie Videogame. Might have languages restrictions or language packs. Read the description on the store game page to know if the EU IP is only needed for activation or for playing also (maybe on EU Servers). Most of the stores offer you their help, or show you how to do this with a tutorial to follow.
STEAM GIFT : A Steam gift is a one-time transfer you receive. You activate and install LEGO Movie Videogame to play on Steam, it is a non-refundable game that stays in your Steam games collection. Please read the store description about any language or region restrictions.
STEAM CD KEY : Use the Steam Key Code on Steam Platform to download and play LEGO Movie Videogame. You must login to your Steam Account or create one for free. Download the (Steam Client HERE). Then once you login, click Add a Game (located in the bottom Left corner) -> Activate a Product on Steam. There type in your CD Key and the game will be activated and added to your Steam account game library.
STEAM KEY ROW : It means for Rest Of the World countries which are not concerned by the region restrictions. This product can't be purchased and activated in Several countries. Please read the store description to know the full list of countries which are concerned. Use the key to Download and play LEGO Movie Videogame on Steam.
Bonus Edition
Bundle
Bundle 1
Standard Edition
Compare Choose & Buy Download (772)

Bought this game for my nephew through Kinguin thanks to this site, great saving!

Not as good as other LEGO games but still good. Got it from Greenmangaming without a problem