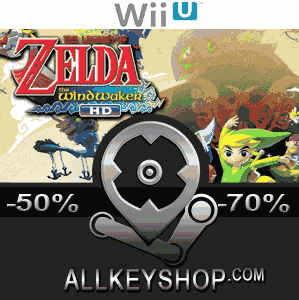 What is Legend of Zelda The Wind Waker HD CD key?

It's a digital key that allows you to download Legend of Zelda The Wind Waker HD directly to PC from the official Platforms.

How can I find the best prices for Legend of Zelda The Wind Waker HD CD keys?

Allkeyshop.com compares the cheapest prices of Legend of Zelda The Wind Waker HD on the digital downloads market to find the best sales and discount codes on trusted stores.

The The Legend of Zelda The Wind Waker HD Wii U is a RPG Action Adventure video game published and developed by Nintendo and Hexa Drive.

This is the remake of the game released on game cube several years ago.

With this version of the game, you have an HD display 1080p.

So graphically that the revolution operates initially, since the details are pushed to their limits, the colors are beautiful, the lighting effects designed and made to perfection. A visual delight.

The core gameplay has been enhanced by other features that vary a bit more in the mechanics of the game.

The title republishes the successes recorded in the remake of Ocarina of Time as the gyroscopic sight and touch inventory. It is good to find them in this installment of the series.

An original new feature is the ability to communicate with other players through a system of bottles in the sea.

Technically, the game is completely different and reworked, and we note the presence of multiplayer modes that will keep you in front of your screen for hours to come in the company of your friends.