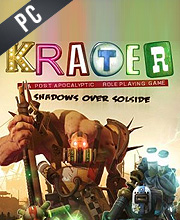 What is Krater CD key?

It's a digital key that allows you to download Krater directly to PC from the official Platforms.

How can I find the best prices for Krater CD keys?

Allkeyshop.com compares the cheapest prices of Krater on the digital downloads market to find the best sales and discount codes on trusted stores.

It is described as a game that combines combat mechanics of action role-playing games paired with top-down tactics of classic and old-school games like Syndicate and Xcom. Its immense world map can be explored freely. The game also includes an extensive crafting system where you can craft unique abilities, weapons, and items.

The game is set in a gigantic crater in a lush post-apocalyptic world. This crater is the aftermath of a huge bomb, and is now where cities and nations have been built. The center of the crater, called the Center Hole, is an abyss stretching deep into the earth – far deeper than anyone has ever dug before.

Your objective in the game is to build your team and try your best to get as deep into the underside of the Krater as you can. You’ll eventually be a dungeon crawler in a game that has an indefinite number of levels. Enjoy more than 60 handcrafted original locations and more than 200 quests in locations ranging from small settlements and large urban areas, to sprawling regional hubs.

Zoom 1m 3m 1y All
Track product
EU STEAM CD KEY: Requires an EUROPEAN IP address or you must activate it with a VPN (Virtual Private Network) in order to play Krater. Might have languages restrictions or language packs. Read the description on the store game page to know if the EU IP is only needed for activation or for playing also (maybe on EU Servers). Most of the stores offer you their help, or show you how to do this with a tutorial to follow.
STEAM CD KEY : Use the Steam Key Code on Steam Platform to download and play Krater. You must login to your Steam Account or create one for free. Download the (Steam Client HERE). Then once you login, click Add a Game (located in the bottom Left corner) -> Activate a Product on Steam. There type in your CD Key and the game will be activated and added to your Steam account game library.
STEAM KEY ROW : It means for Rest Of the World countries which are not concerned by the region restrictions. This product can't be purchased and activated in Several countries. Please read the store description to know the full list of countries which are concerned. Use the key to Download and play Krater on Steam.
Bundle
Collector Edition
Pack X2
Standard Edition
Compare Choose & Buy Download (803)