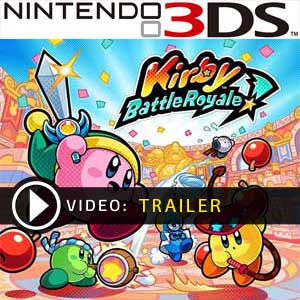 It's a digital key that allows you to download Kirby Battle Royale directly to Nintendo 3DS directly from Nintendo eShop.

How can I find the best prices for Kirby Battle Royale on Nintendo 3DS ?

Allkeyshop.com compares the cheapest prices of Kirby Battle Royale on the digital downloads market to find the best sales and discount codes on trusted stores.

Kirby Battle Royal is an action, beat-em-up video game that is developed by HAL Laboratory and published by Nintendo.

Find out what King Dedede’s plan is all about and while you’re at it get to unlock your abilities as well as battle types in the Cake Royal tournament. Your toughest rival can be found in this tournament and that will be you. It is a Kirby vs Kirby event with 1-4 players in local and online battles. Compete in 10+ battle types and pick from the 10+ battle abilities available. Countless matchups can also be done.

The Ore Express will let you horde treasure while the Slam Hockey will let you knock out opponents and make sure to hit your target Robo Bonkers, as you shoot missiles at him.

If you would want to go at it alone, a single player story mode is available too.

Make sure to learn the basics of battle while collecting Boost Orbs for Kirby to power up. Nostalgic headgears will also be available to wear in the other game modes.

So much fun awaits in Kirby Battle Royal.